For our first visit in Belgium we have chosen its capital – Brussels- for obvious reasons. Usually if you can only pick one city from a country -the capital is the way to go. We added Antwerp as well, because there was an Antwep Pride organised there at the time and it turned out to be a great decision! Antwerp, although smaller and less famous, made a bigger impact on us: it was definitely less boring. But we’re getting ahead of ourselves- let’s start from the beginning.

We started our Belgian adventure in the capital – Brussels. The very first thing we visited was -an accidentally encountered- St. Michael and St. Gudula Cathedral. It is a huge  (or at least it looks huge, since it stands on a hill) Gothic cathedral that is beautiful on the outside as well as on the inside.

Then, because we had heavy backpacks and we still had some time until we were able to meet up with our host, we decided to go and rest in the Brussels Park. It is an amazing park that we’ve visited a few times during our stay there – it has two big fountains, beautiful trees and a lot of place to sit on the grass. But there was also one thing that really surprised us – there were many, many people looking at their phones and walking from one fountain to the other, and back again, like zombies. It took us a minute to realise that at the time, Pokemon Go has just started to be popular and all those people were playing it! It looked so funny but also creepy – all those people, walking next to each other, this way and that- one time all running off at the same time, to catch some rare pokemon that just appeared. We decided to take the opportunity and we created a sign that said “Pokemon need food” with a little Pikachu drawn on it, made some balloons, and put a basket in front of us for money. That was the first time we tried busking with a sign (you can read our busking guide and see our sign here!) and it went quite okay. Unfortunately, it wasn’t a good place for that, since everyone was just looking down at their phones and completely missing the fact that we were sitting just a few meters away. Once they noticed us, however, the sign make them smile and a few even took pictures. We earned quite some money there just for sitting with a nice sign and had the chance to talk to some people about our travels. 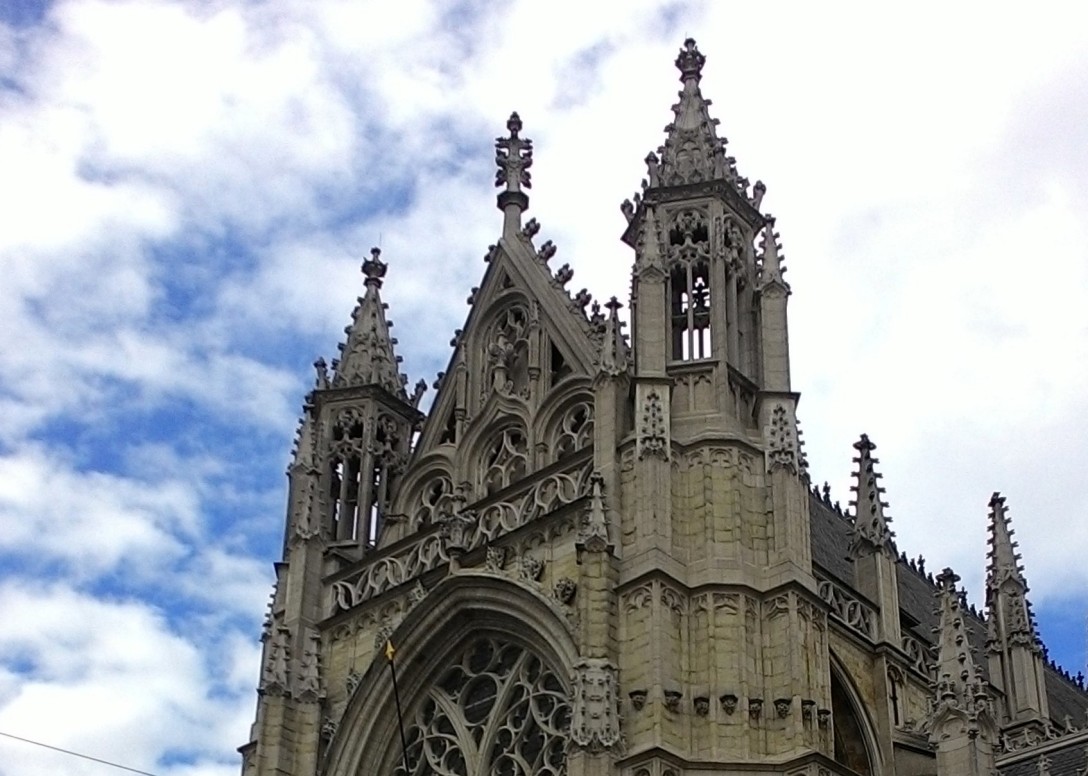 After the park, we went to see Royal Palace of Brussels which is right next to the park and our host’s place. Our host- David- lives in a big house with his many many flatmates, and they all meet once a week to watch a movie together. Everyone was very helpful and we got a lot of maps and tips about stuff to see in the city.

Since we decided to spend a couple of days in Brussels we decided to take things slow. Walk around, visit less known places and just explore the city without any specific plan. That’s why we visited many, many parks and took one of the routes you can find on Use-It maps. (if you don’t know what Use-It is you should check it out! It’s a great project in many European cities for young travellers. You can visit their tourists info and get free maps created by them that are amazing! You can also get some free tea, print your tickets without paying or leave them your luggage for a while. We definitely recommend it!).

On our second day we took the well-known elevator that takes you up to the Palais de Justice which is the largest courthouse in the world. It is super huge and beautiful! You can enter it for free, after a security check, although it’s very easy to get lost inside, since there are no signs for tourists.

We also visited Grand Market and on our last day there was a Flower Carpet there – the most popular event in Brussels. We unfortunately didn’t get to see it because we had no money for the ticket.  On our way there we went to see the Peeing Boy statue and that was a pretty big disappointment – it’s really nothing special.

Of course, since we are poor gays on holidays we had to visit the gay neighbourhood and what we saw there was incredible! There is an alley all covered in queer themed graffiti! It was so amazing to see! There were paintings of many different people within the LGBT+ community speaking about themselves. It was truly amazing and we would love to see more art like that on the streets!

After that, we went to Antwerp. We had the weirdest drivers ever – two black men that found out we are gay. The driver was really nice and asked us about our trip, but the other guy decided to have a conversation with us about gays and tell us many times that he”is tolerant, but…”. He told us that white people can be queer and it’s alright if they are, but black people? Nooo… It’s just not normal for them! The guy believed that being gay is a ‘white-people thing’, and that black people got it from them, just like ‘everything else that’s bad in the world’. After that, he was flirting with Dominika- knowing she was gay- and explaining just how beautiful their babies would be, with dark skin and green eyes. It might seem like a bad experience but surprisingly it wasn’t! They were fun and we were laughing all the time even though one guy was a bit homophobic.

We didn’t have much time in Antwerp to sight-see and the very first thing we saw was Great Market Square and City Hall that is covered with many, many flags! We sat there, next to the Brabo fountain, made some balloon animals and earned a bit of money. The whole Old City in Antwerp looks beautiful and you can just walk there and be amazed with many, many astonishing small alleys.

There was one thing that we was super disappointing in this city- We decided to go and see “the most beautiful panorama of Antwerp” recommended to us by the Use-It map. It was on the other side of the Scheldt River, so we took the St. Anna tunnel which is an underwater passage for pedestrians that goes through the river. You can use old wooden escalators to get inside- They are from the 30s but are perfectly persevered and we had fun riding them. It was an amazing experience both to use them and to walk underneath the river. After we got above ground we went to the sightseeing spot that was our goal and sat on the bench. What we saw was just such a let down. Half of the view was covered by bushes and the rest that was visible was… meh? That was one of the saddest panoramas we’ve ever seen and we felt quite underwhelmed.

On our last full day in Antwerp we went to the Antwerp Pride and you can expect a whole separate post about this event on our blog soon! For now, we can only say that it was amazing and fun!

After Antwerp we spend two days in Hannover but there is not much we can tell about the city other than that we had an amazing host with a very nice husband, two lovely cats, and a massive collection of board games!  We saw a bit of the city with him and went to a gay cafe and a gay friendly pub with wooden dildos hanging from walls. We took the so-called ‘Red Thread’, and listened to some stories about the naked guy who destroyed the Hannover mock-up by jumping on it, and the weird game that was created by their local artist, that many people were playing (one of the tasks was to willingly step into dog poop in order to get a point in the game). We have also seen giant fish – fed by the tourists- and railings covered in locks put there by couples. Since our hosts lived far from the city, we spent a couple of hours in the forest behind their flat, and had fun at the playground there. We also managed to buy 3 pizzas for only 3 euros, so we had a real feast! Unfortunately we didn’t take many photos there so we can’t share much.